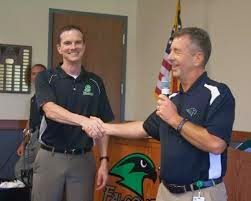 
Robert Lundien, a 1996 graduate of Missouri Southern, has been selected as the Missouri Secondary School Counselor of the Year.

A counselor at Staley High School in Kansas City, Lundien was notified of the selection earlier this month. He will be officially recognized during the Missouri School Counselor Association’s Fall Conference, to be held Nov. 2-4 at Tan-Tar-A Resort.

After graduating from Missouri Southern with a degree in music education, Lundien’s teaching career included serving as band director in Diamond, a counselor for Neosho High School and working in special education for the Webb City School District. While his first love was music, he said he felt a calling to transition into the counseling field.

“There were kids struggling with outside issues and influences on their lives and bringing them to school,” he said. “I started the graduate program at Missouri State and realized that counseling was something I wanted to do in order to help students in a different capacity.

“It was a hard decision to let go of the band world because it had been a major part of my life.”

Lundien said that his time at Missouri Southern left him feeling prepared to succeed in the teaching field.

“I really felt like the classroom experience and going out into the schools helped me have a better knowledge and understanding of what it would be like,” he said. “The quality of education I received was top notch. I felt like the professors went out of their way to make sure we were prepared for the real world.”

“We were taught early on in the music department that achieving success and results will take hard work. That has carried me through teaching and counseling. Making sure the kids are succeeding is a constant process that never ends.”

While he now lives in Kansas City, Lundien has remained involved with Missouri Southern. He currently serves on a teacher education committee that is in charge of scholarships.

“It’s quite an honor for one of our alums to be selected for this award,” said Dr. Al Cade, interim dean of the School of Education. “We are so excited for Rob.”
Posted by Randy at 3:27 PM