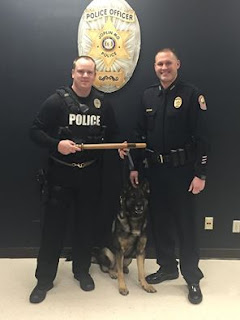 Officer of the Month Bobby Brown and K9 Pax
November 2016

Throughout the month of November, K-9 Officer Brown utilized his partner K-9 Pax with assisting in locating and apprehending suspects who had fled from officers.

On November 22, 2016 Officer Caleb Johnson attempted to stop a black Kia passenger car on Interstate 44, for the owner having a felony burglary warrant. The vehicle failed to yield and fled from Officer Johnson. K-9 Officer Brown later located the vehicle but the driver had fled on foot. K-9 announcements were made but due to no response, K-9 Pax was deployed to attempt to track the suspect. K-9 Pax was able to locate and apprehend the suspect who was hiding in the woods, near a creek bank. The driver was identified as Robert J. Smith and was arrested for 4 felony warrants, 3 misdemeanor warrants, Driving While Revoked, Careless and Imprudent Driving and Resisting Arrest by fleeing.

On November 27, 2016 Officers responded to Outback Steakhouse in reference to a vehicle theft in progress. The suspect, Jason Fuqua, was attempting to steal a vehicle from a female who was putting her grandchildren into the vehicle. Despite one child already being in the vehicle, Fuqua still attempted to take the vehicle but was unsuccessful, due to not having the keys. As Fuqua was attempting to steal the vehicle, he pushed the female down. When an Outback employee came outside and confronted Fuqua, he fled the area, dropping two purses which had been stolen from Outback employee’s vehicles. Fuqua fled south to the Interstate, turned around and then fled across the Interstate as officers got close.

K-9 Officer Brown and K-9 Pax responded to the area of F.A.G. K-9 announcements were made and despite being close by and hearing the commands, Fuqua still failed to comply with officers’ commands. K-9 Pax was deployed and was able to locate and apprehended the suspect. Fuqua was arrested for Robbery 2nd Degree, felony tampering with a motor vehicle, resisting arrest and a parole absconder warrant.

K-9 Officer Brown takes pride in being a Police K-9 handler for the department. Despite tracking of fleeing suspects being one of the most difficult deployments for a K-9 handler, K-9 Officer Brown continues to work to improve and be successful in this field. Thanks to K-9 Officer Brown’s work ethic, training, knowledge and motivation, numerous suspects have been located and taken into custody safely.

K-9 Officer Brown and his K-9 Pax are truly an asset to the Joplin Police Department.
Posted by Randy at 5:58 PM