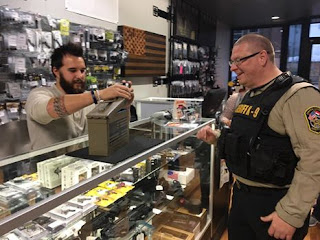 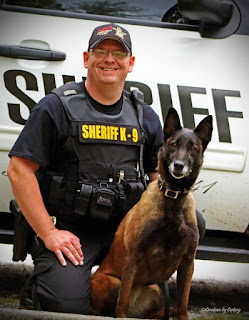 (From the Jasper County Sheriff's Department)

On Friday, Brandon Kelly, owner of Rayzor's Edge Tactical from Joplin, presented Cpl. Matt Smith with a steel small arms munition storage canister that will serve as the final resting place for his K9 partner Lisa.

The ammunition storage canister was custom made by Mr. Kelly as a token of respect for K9 Lisa. The canister was custom designed and painted with a special thin layer ceramic paint called Cerakote coating, which is offered at Rayzor's Edge Tactical to protect firearms finishes.

The canister, the painting process, and the materials were all provided by Mr. Kelly to pay his last respects for K9 Lisa as a cremated remains urn.

Ammunition canisters have a special meaning to Cpl. Smith that reminds him of K9 Lisa. The team was trained to locate and detect military and commercial explosives and munitions, some of those same munitions were originally stored in ammunition canisters such as the one presented to Cpl. Smith. Often, training aides for the team were housed and transported in these types of cans to offer and add an extra layer of protection to the training aides and to protect the contents from weather and temperatures.

The canister shows the year K9 Lisa began working at the Sheriff's Office and her retirement day. The can has a positive law enforcement theme as well as a strong patriotic tone by the American flag background seen on the side of the canister as well as a red, white, and blue felt lining to add extra protection to K9 Lisa's cremated remains.

On hand during the presentation were members of the Sheriff's Office, members of the Joplin Police Department, medical staff from Main Street Pet Care, customers who stopped to watch the presentation, and the human family of K9 Lisa. As you can expect, there were not many dry eyes when Mr. Kelly handed over the urn to Cpl. Smith.

K9 Lisa will be laid to rest in her new urn during a private moment in the near future with the help of the Main Street Pet Care staff.
Posted by Randy at 7:01 PM