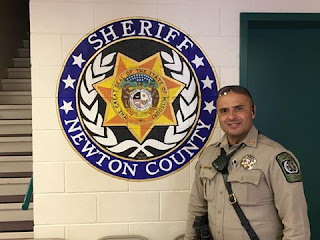 This is Deputy Mario Cabrera. He started with us in the jail as a corrections officer and was later promoted to road deputy. Today is his last day with Newton County as he has been offered and accepted into the Missouri State Highway Patrol's 104th Recruit Class starting in January. He will spend six months in Jefferson City learning to become a Trooper at their training facility.

The MSHP doesn't know just how lucky they are to have Mario. Every day he came to work with a smile. He sincerely loves working in law enforcement and was a valued member of our team. Today we won't say goodbye, but we will say "See You Soon"!

Good luck Mario! We'll see you at graduation in June.
Posted by Randy at 3:24 PM