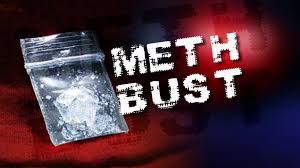 (Four for the price of one today)

Last night at 6:19pm one of our officers stopped a female for riding her bicycle on the city sidwalk at 7th and Harlem. (He recognized her ride by and saw she had warrants on his computer) She was arrested for city warrants and was in possession of meth and drug paraphernalia. Felony Drug Charges.

Last night at 7:16pm one of our officers stopped a car at Broadway and Landreth for lane violations. The female driver was arrested for driving while intoxicated, driving while revoked, possession of meth, diazepam and oxycodone. Felony Drug Charges.

Last night at 11:02pm one of our officers saw two females running across a field near 2nd and McKee. One of the females was arrested for a city warrant and was in possession of meth and marijuana. Felony Drug Charges.

This morning at 3:47 one of our officers contacted a male for skateboarding on a closed business lot at 4th and Byers. He was found to have 5 city warrants and was arrested. He also had a syringe in his pocket that field tested positive for meth. (We don't recommend skateboarding with a syringe in your pocket, especially when it tests positive for meth)
Posted by Randy at 9:54 AM