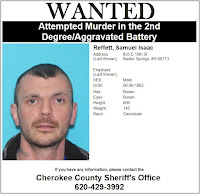 Kenneth Thomas “KT” Ashburn, who was wanted for aggravated battery, was apprehended after the vehicle he was in crashed north of Galena following a pursuit.

At approximately 9:00, Samuel Reffett, who was wanted for attempted murder and aggravated battery, surrendered himself at the Cherokee County Sheriff’s Office.