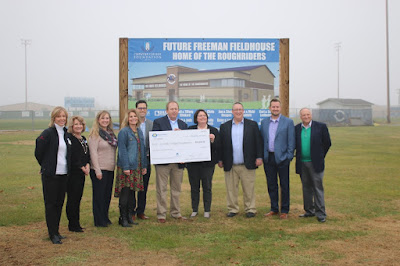 Officials from Empire Electric, a Liberty Utilities Company, presented a check in the amount of $20,000 to the Crowder College Foundation for the Freeman Roughrider Fieldhouse project today.

This donation was preceded by installation of an electric car charging station earlier this year on the college campus.

“Empire and Liberty Utilities is proud to support the Crowder College Foundation. We commend Crowder for their dedication to providing affordable higher education here in southwest Missouri, as well as for their commitment to health and wellness, which is evident in the success of the Roughrider athletic programs. We and the community take great pride in the growth Crowder has achieved here at its Neosho campus and its satellite campuses. This growth is important for the continued economic prosperity of our region. Through our past partnerships, we know that environmental sustainability and technology are also important here at Crowder - these are values we have in common,” said David Swain, President or Empire and Liberty Utilities Central.

“It is such a privilege to work with Empire. They are good partners and friends to Crowder when it comes time to work on a capital campaign. The Crowder Foundation is pleased to help the athletic program fund the Freeman Roughrider Fieldhouse and it is donations such as the $20,000 from Empire that will make the project possible,” stated Cindy Branscum, Director of Development, Crowder College Foundation.

The Crowder College Foundation was established in 1965 and is a not for profit, 501 (c)(3) tax-exempt organization.

The Foundation has a history of service to the institution through the creation of private funding vehicles that have enriched every facet of Crowder.
(Photo: Holding the check are David Swain, President of Empire and Dr. Jennifer Methvin, President of Crowder College. They are surrounded by staff from both organizations.)
Posted by Randy at 9:16 PM