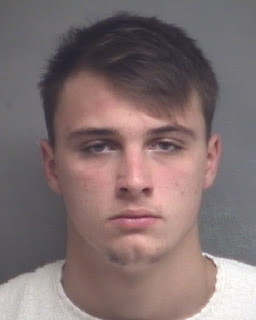 An officer arrived and was walking the perimeter checking security and heard banging from inside the business. Other officers arrived and set up around the building. They heard continued banging and glass break.

As a plan was being established, a south door opened and a suspect appeared wearing a mask. He was given commands but instead ran west, dropped a skateboard down on the street and began to ride away.

A JPD Police K9 was released and gave pursuit. The K9 apprehended the suspect off of the skateboard, and he was taken into custody approximately 12 minutes after the first officer arrived.

The suspect is identified as 18-year-old Joplin resident Dezamin R. Cunningham. Charges are being submitted to the Jasper County Prosecutor’s Office for second degree burglary and resisting arrest. It was determined Cunningham had climbed onto the roof and entered through a roof hatch. He also did a considerable amount of damage while inside the business.

(Update: The Jasper County Prosecutor’s Office filed 2nd Degree Burglary and Resisting Arrest with a $500 cash bond.)
Posted by Randy at 8:49 AM