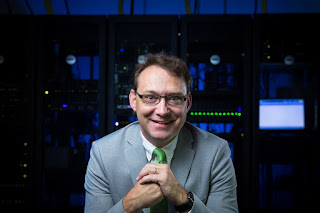 Albert Stadler, chief information officer at Missouri Southern State University, has been selected to serve on a new advisory board for IBM that will help develop academic curriculum for the field of cyber security.

Stadler – who has been at MSSU for 18 years – was one of several candidates from around the country who were nominated to serve on the panel. Members will meet online to help the company develop a virtual cyber security lab, based on requirements shared by top academics.

“It was a unique opportunity to be named to the board and to be able to give input,” said Stadler. “The industry believes there will be an extreme shortage of qualified people in this niche of the information technology industry … as many as 1.5 million by 2020.”

In addition to his service on the IBM panel, Stadler serves on the boards for the Missouri Education and Research Consortium (MERC) and the SANS Institute’s education advisory board, and the REN-ISAC national security group. He was on the program committee for the latter group’s recent inaugural Midwest members meeting held hosted by the National Center for Supercomputing Applications at the University of Illinois. He was also the past chair of the MERC and Missouri Research and Education Network boards.

He has been honored by the Joplin Regional Business Journal as one of its “40 Under 40” recipients and in 2012 received Missouri Southern’s Superior Service Award based on nomination by members of his staff.
Posted by Randy at 5:26 PM