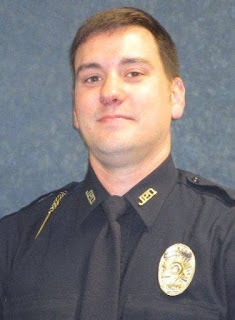 Officer Jason Sandbothe named the officer of the month for numerous actions throughout the month.

On November 26th Officer Sandbothe stopped a vehicle near 4th and Oak Avenue. The vehicle initially failed to yield and the occupants were acting suspicious. It was determined one of the occupants, Andrew Bieber, had provided a false name because he had a felony probation violation warrant for Burglary 2nd degree and a traffic warrant out of Duquesne PD. A search of the vehicle yielded a 9mm handgun with a loaded magazine under the front passenger seat. The occupant of that seat, Joshua Taft, was found to be a felon and arrested on the firearm charge. Another passenger, Kyle Wilkins, had a stolen ID on him and placed him under arrest. Because of Officer Sandbothe’s proactive policing, detectives were able to link Wilkins to an active theft investigation and later charged him with felony stealing.

On November 27th Officer Sandbothe stopped a vehicle near 2nd and Wall Avenue after finding the vehicle had a stolen license plate displayed on it. During this car stop, Officer Sandbothe arrested the driver for receiving stolen property and arrested the female passenger after illegal narcotics were located in the vehicle. During his investigation, Officer Sandbothe also located several checks and credit cards that did not belong to either occupant. He also located a book with Joplin residential trash pickup schedules and person identifying information for numerous individuals that included names, dates of birth, social security numbers, email passwords and bank account information. Because of his thorough investigation, charges were also sought for Fraudulent Use of a Credit Device, Forgery, Trafficking in Stolen Identities and felony Stealing.

Officer Sandbothe is a dedicated police officer who is constantly searching for criminal behavior and is willing to go the extra mile during his investigations. Thank you Officer Sandbothe for your hard work and dedication to the Joplin Police Department and citizens of our community and congratulations on being awarded Officer of the Month for November of 2017.
Respectfully,

Matthew Stewart
Chief of Police
Posted by Randy at 3:27 PM