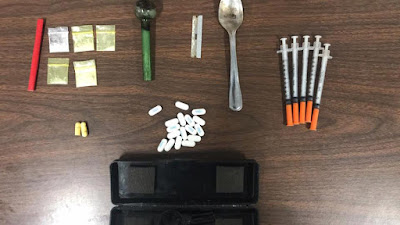 (From the Sarcoxie Police Department)

Two Sarcoxie Officers were conducting routine patrol when they observed a White Chevy TrailBlazer without license plate lights, making the plates illegible! The officers initiated a traffic stop and made contact with two male subjects. The Officers ran their names. The passenger, identified as Darrel Long, 34, had an outstanding warrant out of Carthage for petty theft. Long was pulled out of the vehicle and placed under arrest. Long was found to have a needle on him. The conversation went as so:

Officer: Oh, you've got a needle? Are you diabetic or something?
Long: Yea, I've been a diabetic all my life!
Officer: What are you? Type A or Type B?
Long: Type A!!
Officer: Oh Yeah?! Last I checked, it was Type 1 and Type 2!

*SPOILER ALERT* The needle tested positive for methamphetamine! *NO SURPRISE*

The driver was arrested for driving while suspended. The Sarcoxie officers and a Jasper County deputy searched the vehicle up and down and were unable to locate anything. The Deputy opened up the hood, and right next to the fuse box was a plastic container. Everything you see in the photo below tested positive for methamphetamine or ecstasy. We told Long if he had anything else on him, he better tell us before he gets to the jail. Long told us he had three more needles on him and stated that was it.

Once we arrived to the jail, Long was searched. Immediately during the search, a gauze ball was found on him. Upon opening the gauze ball, 17 Sudafed pills were found.