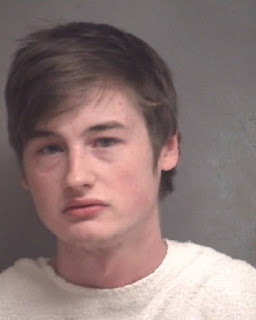 Yesterday evening at 9:37 p.m. officers were dispatched to area of 26th and Florida for approximately 10 gunshots (called in by multiple callers).

The area was extensively searched to the north, east, and, west, where the shots were reported.

Officers decided to move south to 28th St, when they contacted a male exiting 2510 E 28th, who stated he nothing to do with it, and was told to leave. He said he had secured a handgun in his vehicle.

While officers were speaking to him, they heard what they believed to be a muffled gunshot within the residence, based on the initial calls they had received.

As officers surrounded the house and made a plan, the garage door opened, and officers could see an older male and a younger male actively fighting. Officers successfully detained both. The house was entered and cleared. TVs were broken, doors were torn down, or destroyed, and two bedrooms were completely demolished, and there was broken glass everywhere.

The suspect, a 21-year-old male, had been threatening to kill his father and was destroying the home while officers were outside. The believed gunfire was the suspect banging on doors and walls.

The suspect was in possession of Valium, about 49 grams of marijuana, and 83 rounds of 9mm ammo.

The firearm was located in the pickup outside the residence. It's believed the suspect was driving around the area and discharging the firearm from his mother's vehicle, resulting in the initial calls. Austin W Smith, 21, was arrested for numerous charges.
Posted by Randy at 8:31 AM