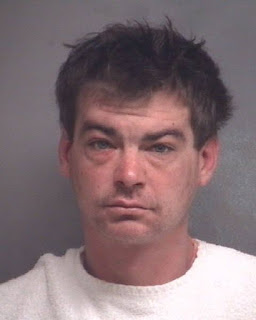 Yesterday morning at 1:16 a.m. one of our officers was driving at 10th and Porter. He saw a male cross the road in front of him, taking a drink out of an open bottle of vodka. The officer contacted the male. The male began cursing the officer out and refusing to give him his name. The officer tried to control the male after he reached into his pockets, and both went to the ground.

The suspect jumped up and began grabbing at the weapons on the officer's belt, and a fight ensued. The male then ran north, still cursing at the officer. The officer was able to knock the male to the ground in a vacant lot to the north, where the fight continued. 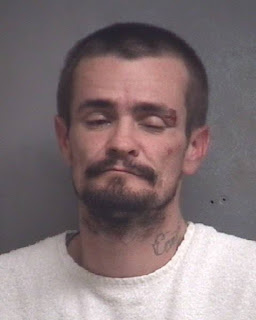 At this time the officer and an arriving backup officer were able to get him into custody. It was determined the item he threw was a bag of marijuana. He was charged with public consumption, possession of marijuana, resisting, assault on officer and other violations. He as identified as Benjamin Carlson, 34, Joplin. (top photo)

A witness followed a suspect vehicle they had seen hit another vehicle on a parking lot. The officer arrived and located the suspect vehicle parked in front of Party City.

A male was at the passenger side and walked to hte driver side, ignoring the officer talking to him. He then took off running to Petsmart to the front doors, then turned and ran down a row of vehicle before falling. Officers arrested him.

He continued to resist and fight, trying to spit on officers. He also kicked several officers trying to place him into the police car. He was determined to not be the driver of the vehicle, but had ran because he had six warrants from Joplin, Carl Junction and Jasper County. He was also charged with resisting and assaulting officers. He was identified as Bradley S. Harris, 33, Galena.

All officers involved stayed on duty with minor injuries.
Posted by Randy at 8:08 PM