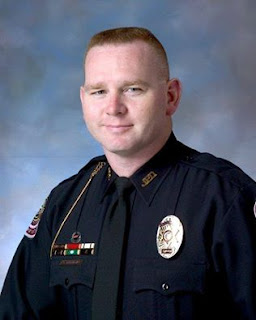 We would like to recognize our April 2016 Officer of the Month, Officer Ron Buchanan:

On April 25th, 2016, Officer Ron Buchanan responded to an address in the southeast part of the city in reference to a theft of utilities. Buchanan was able to determine through his investigation that a suspect had unlawfully entered a residence with the purpose to use the electricity for his needs at another address.

Officer Buchanan discovered that the suspect was being compensated by an elderly female as her caregiver at the first location. The female suffers from cerebral palsy is confined to a wheelchair and is unable to care for herself without assistance. Buchanan discovered that the female pays the suspect eight-hundred dollars a month for rent, utilities, and food. The elderly female was told that the utilities had not been paid through her disability check for several months. The suspect who has control of the elderly female’s bank card reported to her that she has not received her monthly checks for some time. The home that the elderly female lives in was without electricity and the suspect had recently been served with an eviction notice for failing to pay the rent.

Officer Buchanan discovered that the elderly female had been left alone for some time in the residence without food or water, and the temperature was rising to above 82 degrees in the home. Buchanan was able to provide her some water to drink, and to make contact with her case worker as well as staff with a local home care company.

As a result of Officer Buchanan’s awareness to this situation, he discovered a handicapped citizen in need of health care and who had been taken advantage of financially. Officer Buchanan arranged and assisted in finding new living arrangements for the elderly lady, and stayed over his assigned shift to make sure that she received the proper care needed.
Officer Buchanan was able to present various charges against the suspect to the County prosecutor.

It should be noted, that Officer Buchanan was training a new officer at the time of this incident. The trainee witnessed Officer Buchanan’s exemplary care and compassion for the victim. This was an exceptional learning tool for the trainee, with positive benefits for years to come.

Matthew Stewart
Chief of Police
Posted by Randy at 8:43 PM