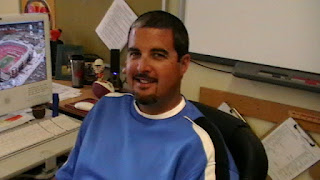 According to a report on Tulsa's News on 6, Jason Sauer (pictured), the softball coach who the Oklahoma Bureau of Investigation said was shot several times by Vinita lawyer Karl Jones Friday was dating the lawyer's ex-wife and the ex-wife was in the home where the shooting took place.

A prayer vigil was held Sunday night for Vinita High School softball coach, according to another report from the station.

At that residence, Karl Jones, a local attorney, and Jason Sauer, a high school coach, initiated a verbal altercation, which gravitated inside the home.

There, Jones shot Sauer several times. Sauer was transported to a Tulsa hospital in critical condition. Jones (d.o.b. 9/19/1960) was arrested on the scene for shooting with intent to kill and booked into the Craig County jail.

(Vinita Public Schools photo)
Posted by Randy at 6:22 AM