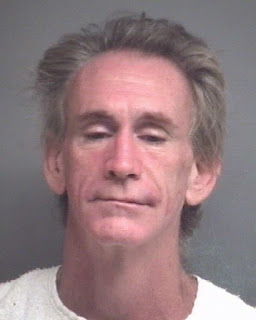 On August 24, 2017 at 0311 a.m a Newton County Sheriff's Office deputy who was in the area of Olive Garden heard an audible alarm. He tracked down the alarm to be Cheddars, 3120 East Hammons.

The deputy discovered that a glass door on the south side of the business had a rock thrown through it and entry was gained.

Joplin Police officers were then dispatched to investigate the burglary. Items from the business were stolen during the burglary. Surveillance video still shots were disseminated of the suspect by Facebook and media.

The suspect is identified as Dustin Cranfill, 46, Joplin. Charges are being submitted to the Newton County Prosecutor’s Office for burglary.
Posted by Randy at 11:15 AM