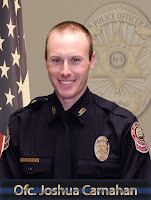 Our officer spotlight this week is Officer Josh Carnahan.

Growing up, Officer Carnahan worked on his family’s farm and ranch in Kansas where he still enjoys working in his off time.

Officer Carnahan is currently assigned to the 1 evening 3 midnight's patrol squad. Officer Carnahan explained that he has the goal of joining SWAT and becoming an investigator eventually. When asked what he wanted the public to know about his job Officer Carnahan stated

“I wish the public to know that I love the job I have been given day in and day out, and that I intend to leave a positive influence on every citizen I meet.”

In his off-time Officer Carnahan enjoys playing video games and exploring the outdoors through hunting and fishing every chance he gets. Thank you, Officer Carnahan, for sharing with the public.