Fred and Red's reopening this week 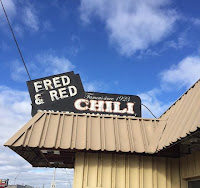 Fred and Red's will open sometime between Tuesday and Black Friday and when it does prices will be the same as they were when the business closed in 2012.

From the KOAM report:

"The response from the community has been overwhelming to say the least. So there's a lot of pressure there which is fine, I mean it's fun," (owner David) Schaefer said.

Schaefer purchased the restaurant which came with its recipes, in mid-July.
Posted by Randy at 4:49 PM