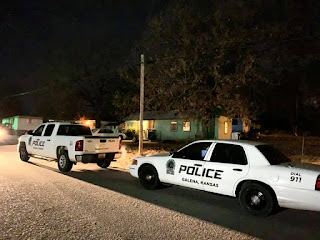 (From the Galena Police Department)

On Tuesday December 25, 2018 at approximately 10 pm, officers with the Galena Police Department received information that Leslie West was at an address north of town.

Ms. West had an outstanding warrant through the Galena Municipal Court for failure to pay fines. Officers located Ms. West at 415 W Vine Street and took her into custody. Once in custody Ms. West was found to have suspected methamphetamine in her possession.

A search warrant was requested for the residence. Once officers received the approved warrant; they returned to 415 W Vine on December 26, at approximately 1 am. and completed a search of the residence.

Five additional people were taken into custody and transported to the Cherokee County Jail.

Charges are being requested through the County Attorney’s Office for the following:

Rickey L. Turley, Alicia N. Maize, Zachary W. Rantz, and Angela Laturner are being held on a $5000.00 bond each for possession of certain stimulants and possession of drug paraphernalia.

James Walker is being held on $5500 bond for possession of certain stimulants and possession of drug paraphernalia. He was also arrested for seven outstanding warrants through the Galena Municipal Court for failure to pay fines.

Leslie A. West is being held on $3066.00 for possession of certain stimulants and the outstanding warrant through the City of Galena.
Posted by Randy at 3:45 PM