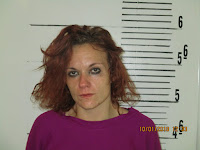 Kala L. Larrabee, 24, Lamar, was taken into custody December 20 by Deputy McManis and Deputy Daglish at a residence in Lamar.

The Barton County Sheriff’s Office is asking for the help of the community in locating a wanted person.

On 12-13-2018 Kala L. Larrabee, age 24, of Lamar was sentenced to be transported to the Department of Corrections for violating the conditions of her probation.

Larrabee was given a furlough until 12-17-2018 at 8 a.m. however she failed to return to the Barton County Jail.

Larrabee’s original criminal charges was 1st degree burglary and stealing. A warrant was issued for her on 12-18-2018 for failure to obey judge's orders.