This Neosho dog had 75 percent of its skin removed while still alive, reward offered for information leading to arrest 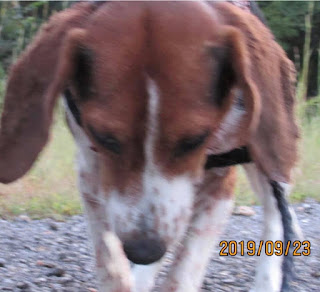 (From the Neosho Police Department)

On 09/23/2019 at approximately 5:30 PM officers were dispatched the area of Greenwood Blvd and Lou Ida drive in reference to animal abuse.

When officers arrived, they found a female beagle that had approximately 75% of its skin removed while still alive.

The animal either escaped from the assault or was set free in this condition.

Officers caught the injured animal, and after consulting veterinary staff; the animal had to be euthanized to end its suffering.


The dog had come from the area of Hilldale Dr. when it was called in by local residents.

After further investigation detectives learned the dog’s owner resided in the 1300 block of Lou Ida Drive. The dog had escaped from its residence while the owners were away. When the owners left town, the dog was not in its mutilated state.

Through the generosity of the Newton County Sheriff, Chris Jennings, and several anonymous citizens a $1000 dollar reward for information leading to the arrest and conviction of the person(s) involved is offered.

Sheriff Jennings has also graciously offered the assistance of his department during this investigation.

A facial photo of the beagle victim (edited for public view) is being provided in hopes someone witnessed the injured dog leaving the suspect location or heard the assault take place.