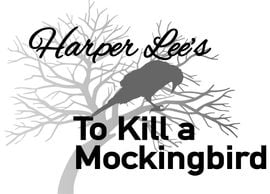 Stone’s Throw Dinner Theatre is proud to announce its upcoming production of To Kill a Mockingbird, showing October 4, 5 and 6 and October 11, 12 and 13.

To Kill a Mockingbird is an intense drama set during the Great Depression and addresses serious racial issues that continue to plague us today.

It’s the summer of 1935 in Alabama, where young Jean Louise Finch – or Scout, as she is fondly called – manages to live a rather carefree and privileged existence, insulated from issues of race. That changes when Scout watches her father, Atticus Finch, a well-respected local lawyer, defend an innocent African-American man against a potential death sentence which looms threateningly against him because of racial prejudice.

Scout learns that “growing up” often means doing what is right, even when it comes at great cost. To Kill a Mockingbird is now considered an American masterpiece about the power of childhood innocence, morality and love.