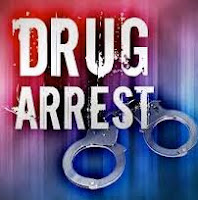 (From the Pittsburg Police Department)

On Monday afternoon, September 23, 2019, at approximately 1:20 pm, law enforcement officers of the Pittsburg Police Department initiated a traffic stop on a vehicle in the 4000 block of N. Parkview Drive, in Pittsburg. The stop was made in reference to observed moving and equipment violations.

Officers made contact with the driver, who was identified as 53-year-old Franklin E. Brisbin Sr. of Pittsburg, and the passenger, 56-year-old John L. Pelican, also of Pittsburg.

Officers obtained permission to search Mr. Brisbin’s vehicle, during which a stolen handgun was located. The handgun had been reported stolen during a residential burglary that occurred in Pittsburg in 2018.

Further investigation resulted in the arrest of both Brisbin and Pelican without incident. While Mr. Pelican was taken in custody, officers located what is believed to be over 15 grams of methamphetamine on his person.

Both Mr. Brisbin and Mr. Pelican were transported to the jail at the Crawford County Sheriff’s Office for booking. Mr. Brisbin was arrested for felony possession of a stolen firearm, and is being held in lieu of $3,000.00 bond.

The investigation into this incident is ongoing at this time. Anyone having information related to this crime, or others, should contact the Pittsburg Police Department at (620) 231-1700, or at our automated tip line, (620) 231-TIPS (8477). Callers may remain anonymous.
Posted by Randy at 8:33 PM