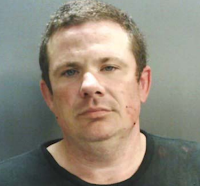 6/17/2019 Catherine Mallory 41 of Joplin, MO was arrested for Fugitive from Justice.

6/18/2019 William F Askew II 38 of Pittsburg, KS was arrested for Resisting Arrest, Armed Criminal Action, Unlawful Possession of a Firearm, Unlawful Use of a Weapon, Possession of a Defaced Firearm, Stealing a Motor Vehicle and Driving While Intoxicated - Persistent Offender.

(The charges for which the above were arrested are mere accusations and are not evidence of guilt. Evidence in support of the charges must be presented before a court of competent jurisdiction whose duty is to determine guilt or innocence.

For a more detailed list of inmates currently in custody visit our web site at: http://www.jaspercountysheriff.org/Documents/inmate_roster/InmateRoster.pdf The upper left hand corner of the INMATE ROSTER will reflect the date and time it was updated.

The INMATE ROSTER is subject to change as individuals are booked and released from jail.
Posted by Randy at 11:21 AM