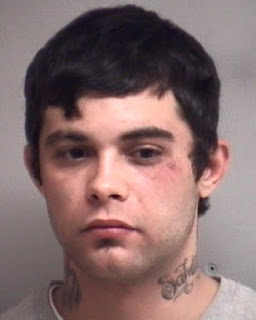 On 01-16-2016, the Joplin Police Department responded to 2702 S. Main Street, Zips #6 Convenience Store, in reference to robbery that just occurred.

The clerk advised the suspect came in the store and demanded cash from the clerk and threatened that he would “blow her head off”. The suspect stole and undetermined amount of money from the store and fled on foot.

A witness saw the suspect leave the store and followed the suspect to a point where he observed him enter a residence at 2905 S. Joplin Ave.

Officers responded to this location and were able to call the suspect out of the residence. He was taken into custody without incident.

The suspect has been identified as Joshua L. Tate, 05/09/1987, of Joplin, Missouri. Charges for Robbery in the 1st Degree will be sought through the Jasper County Prosecutors Office. Tate also had felony warrants for his arrest for Parole Violation and Failure to Register as a Sex Offender out of Jasper County. He is currently in custody at the Joplin City Jail.
Posted by Randy at 10:52 AM