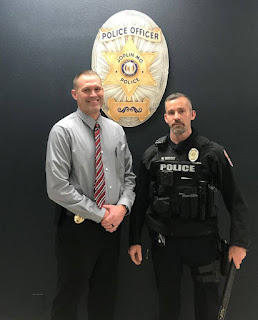 On October 4, 2018 Officer Wesley Massey was conducting a foot patrol in the 1100 block of Jackson Ave. Officer Massey had information that a wanted subject was staying at this address and had active warrants.

Officer Massey remembered the other suspect had PC for first degree assault and armed criminal action from our shift briefing.

Officer Massey called for a backup. Other officers arrived on scene and were able to take them both into custody.

The female was arrested for resisting arrest by fleeing. The male was arrested for possession of a controlled substance, felony fleeing, receiving stolen property and felon in possession of a firearm. Officer Massey searched the vehicle and located a stolen Ruger .380 LCP. Due to Officer Massey’s proactive approach a stolen handgun was taken off the streets.