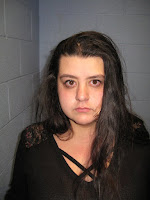 (From the Webb City Police Department)

On Wednesday, January 30, 2019 at 05:19 hours officers with the Webb City Police Department attempted to stop a grey 2013 Dodge four door passenger vehicle for improper registration and suspicion the driver had warrants for her arrest.

The vehicle fled south on Madison Street from Austin Street. The driver continued to flee in the vehicle westbound on MacArthur Drive (MO 171) where it failed to navigate the roundabout at Stone’s Corner & left the roadway.

The vehicle became disabled and the driver, Angelica D. Hensley (21-year old white female from Joplin), along with the other occupant, Jeffery Reichard (27-year old white male from Carthage), were taken into custody without further incident. No injuries requiring medical transport were reported. The Missouri State Highway Patrol is investigating the crash.

Angelica Hensley was taken into custody for warrants from Carthage Police Department and the Joplin Police Department. Additional charges of Resisting Arrest by Flight, Possession of Drug Paraphernalia, along with several traffic violations have been filed with the Webb City Municipal Court. She is being held in the Webb City Jail until she can post bond.