Seneca man arrested for burglary, property damage after deputies find him inside residence 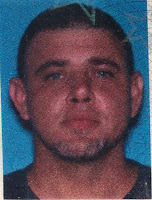 Just before 4:30 pm on Wednesday, July 25th, Cherokee County Sheriff’s Deputies responded to a report of a suspicious person approaching an unoccupied residence north of Riverton.

Upon their arrival, deputies discovered the back door had been kicked in and while clearing the home, they found 40-year-old James Dowell, of Seneca Missouri, inside.

Dowell was arrested and transported to the Cherokee County Jail on allegations of Burglary and Criminal Damage to Property. His bond is currently set at $6,000.00.

“In this case, deputies were able to quickly respond and apprehend the suspect before he could steal anything and leave the scene,” stated Cherokee County Sheriff David Groves.

“We always encourage citizens to contact our office, or their local police department, if they see something suspicious and this is just another example of how vigilant neighbors who promptly report that suspicious activity can assist us with holding criminals accountable,” concluded Sheriff Groves.
Posted by Randy at 9:54 AM