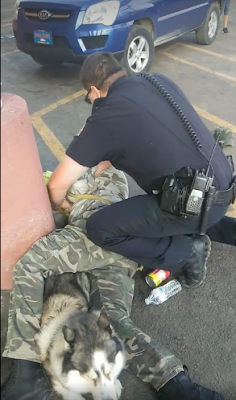 We have received some messages and inquiries about a Facebook post from this afternoon showing some pictures and video clips from an arrest today. The post has been shared hundreds of times.

The videos show one of our officers with a suspect pinned on the ground, with the suspect yelling, and other officers arriving on scene. Due to the short clips, there is no clarity about the circumstances leading up to that point.

To dispel some rumors and claims, made on the post, we felt it would be appropriate to share a few details of what occurred leading up to the events contained in the videos and pictures.

Today, 1-21-2018, at 1:38 p.m. Joplin officers were dispatched to a call at 626 South Jackson for a male with a dog inside the business, who was cursing and making threats towards an employee. The caller said the male had previously been banned from the property. When an officer arrived, the male refused to stop while walking away from him and then tried to enter Dollar General, which adjoins the business. As the officer caught up to him, the suspect turned and tried to assault the officer, leading to a short struggle. At about this point, the recordings and videos made by a citizen start, showing the male on the ground, yelling and not cooperating, and the officer trying to maintain control of the suspect’s left arm while waiting for backup.

Anyone who has additional information or video of this incident is encouraged to contact us at 417-623-3131.

(Note: One video of the incident described in the Joplin Police Department post can be found at this link. The photo is a screenshot from the video.)
Posted by Randy at 6:54 AM