Bond set at $25,000 cash only for Joplin man charged with first degree arson 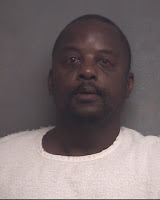 The Jasper County Proseucting Attorney's office formally charged Brian Barksdale, 41, Joplin, with arson in the first degree and his bond was set at $25,000 cash only, for his alleged role in setting a fire Wednesday at Apartment 7 at 1015 South St. Louis.

The Joplin Police Department news release on Barksdale's arrest is printed below:

On May 23, 2018 at 11:05 p.m. the Joplin Police Department responded to 1015 South St. Louis, apartment #7, for a structure fire. When officers arrived on scene, there was a male sitting in front of the fire and an angry crowd accusing the male of setting the fire on purpose.

The male, Brian W. Barksdale, 41, Joplin, was arrested for first degree arson. A family that lives directly above Barksdale’s apartment was displaced by the fire. No injuries were reported.
Posted by Randy at 7:44 PM