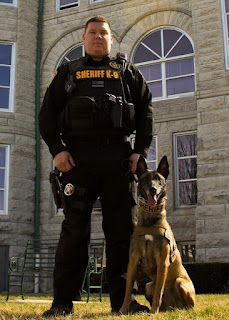 (From the Jasper Police Department)

Contact was made with the occupants, Christopher Drum and Gary Drum, both of Neosho. The officer knows Christopher to be in possession of drugs. Gary came back with a probation and parole hit for burglary. Gary stated he had recently been released from prison.

A positive indication from K-9 Holi gave officers probable cause to search the vehicle. During the search, several Harley Davidson collectibles were found, as well as other collectibles, ipods, Army veteran collectibles and pocket watches, i-tune cards, a credit card with a females name, 2 guns and other items were found. It was suspected that the items were possibly stolen and/or taken during a burglary. Meth related drug paraphernalia was also found.

After investigation, it was determined the property was stolen from a residence in Newton County.
Special thanks to K-9 Holi and Deputy Datum for their assistance. Because they responded and because of their training and experience, law enforcement was able to recover a high dollar amount of property that was stolen.
Please Note..... Both persons arrested are innocent until proven guilty in a court of law.
Also thank you to Jasco dispatchers for helping with the case and getting things lined out with other agencies.
Posted by Randy at 4:22 PM