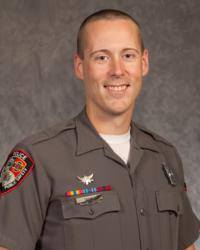 Master Patrolman Jeff Taylor succumbed to injuries sustained on May 23, 2011, while assisting with tornado disaster response efforts in Joplin, Missouri.

Patrolman Taylor had just returned to a command post on a department ATV to drop off another first responder when a bolt of lightning struck next to where he was standing. Other public safety officers on the scene immediately began CPR and stabilized him for transport to the hospital.

He was transferred to St. John's Hospital in Springfield, Missouri, where he remained until succumbing to his injuries on June 3, 2011.

Patrolman Taylor had served with the Riverside Police Division for six years and had previously served with the Webb City Police Department and Platte County Sheriff's Office. He is survived by his two children.
Posted by Randy at 8:54 AM